Every city is its own character. In its tangle of street-corners and boulevards, shops and cafes, landmarks and graffiti-sprayed alleyways, a city finds a way to live, breathe, and move through the flow of evening rush hours and quiet afternoons in a way unique to itself. It’s true of Sarajevo and Paris, Belgrade and Boston, Budapest and Amman, and the dozens of other cities I’ve visited over the past few years. And here in Belfast, it’s true as well.

I’ve traveled in and out of Belfast several times since arriving in Northern Ireland, usually by taking a bus from Ballycastle, one to Ballymeena in central Antrim, and then another from Ballymeena to the base of Hotel Europa, famous as Europe’s “Most Bombed Hotel”. I think I’ve made this journey five or six times now in the past month and a half, in order to get out of the small town environment of Ballycastle and Corrymeela for a weekend to soak up the bars, nightlife, and restaurants of Ireland’s second largest city.

Walking along the streets downtown, or through the Botanical Gardens near Queen’s University, it’s easy to forget the images from the not so distant past of checkpoints manned by British soldiers, paramilitaries totting Kalashnikovs and bombed street corners that painted the picture of a city at war. Like Sarajevo or Budapest, Belfast has strived to escape its darker past, in the past twenty years becoming one of the United Kingdom’s newest, youngest, most vibrant hubs for education, tech, and trade — something made possible by its close connection to the Republic to the South. In Belfast’s city center, at least, there’s a story of growth and renewal that its heartening to see. Outside of the center, though … that’s another, much more complicated, thing.

For every new evolution — such as the ‘Titanic Quarter”, which has turned an industrial shipyard used to construct such behemoths as the Olympic or Titanic into a quickly developing waterfront center — there are neighborhoods and streets which still cling to nationalism and sectarianism of the Troubles. Loyalist East Belfast; Shankill Road and Falls Road; The Village and Short Strand. Each of these names belongs to a side of the conflict — to Nationalists or Unionists, Loyalists or Republicans — and the maze of zones where one side belongs and the other is excluded is a patchwork tapestry that winds through the city, marked by flags, graffiti, and murals that clearly marks out the territory of Protestants and Catholics. The guns may have been silenced two decades ago, the paramilitaries disbanded, and the killings stopped. But still the divisions, the sectarianism remains.

I came most recently to Belfast with a group of high-school aged students from rural Northern Ireland who I’ve been working with for the past week or so. Many of these kids have grown up in small towns that are predominantly Protestant or predominantly Catholic, and have gone to segregated Catholic or Protestant schools, and because of that the conflict doesn’t seem to cast as wide a shadow as it would to someone from Belfast or Derry/Londonderry. Some seemed unsure about the particulars of the Troubles, which paramilitary group belonged to what side or the events such as Bloody Sunday, the Omagh Bombings or the Battle of Bogside. To them, all of that is history, a vague and undefined history that belongs to their parents generation, not to their own.

But even as I’ve seen these young people make friends and connections between Catholics and Protestants over this past week, it’s clear that they still live within the divisions set by the Troubles during their day-to-day lives. Watching some of them tense while we walked through a Loyalist neighborhood, while others grew visibly uncomfortable by IRA-glorifying graffiti in the Republican Falls Road, and you realize that even if younger people have become able to reach across and make friendships between religions and national identities, there is still a firm sense of where they do and do not belong.

For them, this is, and will always be, a divided country, and despite their shared citizenship in Northern Ireland, there will always be parts to this nation that they are not welcome in. That is a hard thing to grapple with, and something I’ve been dealing with myself as I work more and more with youth in Northern Ireland and the British Isles at large.

And there are walls here. Not just mental walls, but physical ones, dividing communities in the name of peace and security while keeping both sides firmly apart through a concrete barrier. Called “Peace Lines” or “Peace Walls”, there are today nearly 50 throughout Northern Ireland — mostly in Belfast, but also Derry/Londonderry, Portadown, and Lurgan. Ostensibly established as temporary structures to create a sense of security for people living close to one another in opposite communities (so-called “interface areas”), many of which experienced the worse of the sectarian violence during the Troubles, today these walls have become seemingly permanent monoliths, as part of the city’s architecture now as the City Hall or Stormont Assembly.

What was once temporary has become indefinite; structures placed to calm sectarian violence now serve to further separate these communities from each other. The comparisons to the “Security Barrier” in Israel-Palestine aren’t too much of a stretch to make, and it’s shocking to see something so militant and imposing right in the heart of the United Kingdom. 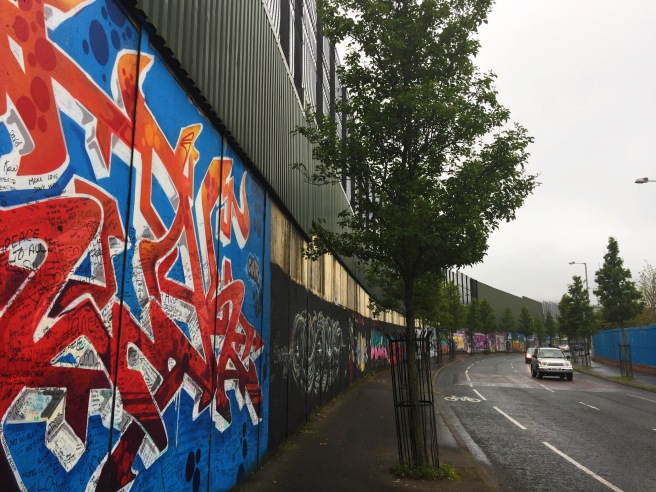 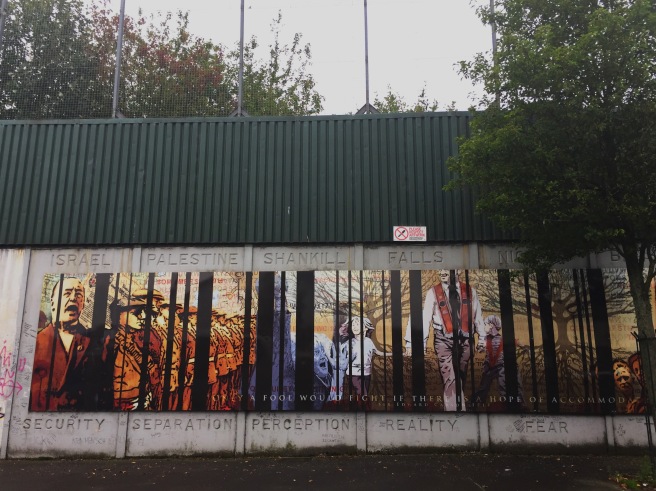 Even in the UK, in Europe, in the Western world — the supposed bastion for tolerance, human rights, and equality — there are walls. There are divided communities. There is separation and sectarianism and fear. And these days, rather than calming and solving those tensions, we seem to be returning back to them — Brexit, Trump, the National Front in France.

Sometimes I want to take these people dividing us today and show them the young adults I’ve been working with these past few weeks, and show them how divisions can be made in the span of mere years, but can take generations to heal. Walls and barriers in the name of security may seem an easy solution — whether it be to keep out migrants from Latin America or the Middle East or to separate conflicting communities in Northern Ireland — but, almost always, they tend to create far more problems than they solve.

But Belfast is moving forward. I’ve shown only the worst of it here on this blog — because it’s important to show — but I haven’t shown the pubs with Protestants and Catholics mingling together over a shared love of Irish music. I haven’t shown the festivals, or the murals that proclaim unity and reconciliation over exclusion and identity. There is so much that is good and positive in this city too, and so much that is worth celebrating. That goes not just for Belfast, it goes for Northern Ireland as a whole.

When I speak to people in Northern Ireland, they often ask me why I’m here — I could be in France or Spain or Germany, or London or New York, instead of this oft forgotten corner of the United Kingdom. And I say I’m here to learn. I’m here too short of a time to be any real part of this country’s healing, but every part of the world I’ve experienced that has gone through conflict, through hardship and sectarian strife, has broadened my view of the world and strengthen my conviction to be some positive part of its future.

Our world isn’t all European cafes and beautiful mountain vistas and sailboats of the Riviera — although those parts should be celebrated for what they are. It’s the hard and difficult parts as well. It’s the parts that have gone through the worst humanity can inflict upon itself, and emerged from it again, that we can sometimes learn the most from. Sarajevo is that; the refugee camps in Jordan are that; Northern Ireland is that. And that, above all, is why I’m here.

I’ll leave you with one last mural, which I found on the peace wall between Shankill and Falls road. Thanks for reading.

One thought on “A Portrait of Belfast”