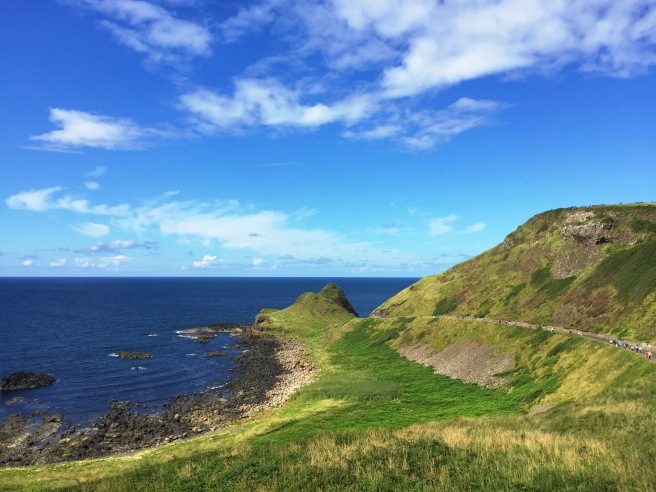 There is something about the sea, and the rain that comes and goes in sheets from off the coast, and the golden light of evenings when the sun finally peers out from the clouds, that creates a space for long and slow thoughts here along the North Coast of Ireland. I need this.

Been having a lot of time for thinking, lately. It’s been a month, now, since my last post here — and, well, I’m letting each day come and go as it passes, and in the process trying to let my thoughts do the same. I’ve noticed that I’ve been stepping back from politics, and the intensity of international affairs and political science and academia this past month, in a way that I hadn’t had the chance to in Boston. I’m still reading the news of course, following the ups and downs of what’s going on not just at home but in the world, but I’m trying not to let it devour and consume my thoughts and time the way it so often did back at Northeastern. I’m focusing on the things I can do, here, instead — the act of connecting with others and their healing, of being a part of the community at Corrymeela, of learning to love and appreciate this land and the time I have in it.

When I first started this blog, now three summers ago during my first time really abroad, I knew that I wanted to see the world, and to write about it. Two years, three summers, several countries, and an international co-op later, and I’m finding that, if anything, that that is the one constant that still rings true. There is still more of the world that I want to see, still more to experience, and still more that I need to write on. I’m trying to hold on to that.

But for now, here in Northern Ireland, I’m trying to just — pause — and find out after these three hectic and wonderful and difficult years who I still am, and what it is in this world I find worth traveling to, experiencing and writing about. There will be time, still, to have a hand in International Affairs and helping solve the conflicts in the Middle East, the refugee crisis and everything else going wrong in this world. But right now, I can just focus on being here, and now, and not put too much worry towards what the future might hold.

I have had nothing conclusive come out of any of that — yet — but these long nights and hard mornings and afternoons spent a book as the rain beats relentlessly against the windowpanes is getting me… somewhere, at least.

There’s something primordial about this coastline, called the Causeway or North Coast here in Northern Ireland. Not just old– the Appalachians back home in the States are old, and they wear their age like a comfortable, welcoming blanket. Here, it feels like you are on the edge of the world, not just in space but in time — as if you’ve stepped back into some ancient, wild, untamed era, back when the earth was still young. It’s not something you see in the rest of Ireland, all domesticated fields and little villages, but along this particular stretch of shore it’s hard to escape feeling that this is a place that doesn’t belong to man, but to nature and to the elements.

Even if there are now dozens of tour buses carrying people as far away as China or India to this little pocket of Northern Ireland to see the Giant’s Causeway or filming locations for Game of Thrones, at the end of the day every visitor and tourist here feels small, merely momentary observers to a land that has remained seemingly unchanged for generations, and yet in the lifespan of the Earth is in fact ever changing, shaped as it is by the movement of lava and glaciers and the sea over millennia.

It’s a powerful feeling, and one that not even a hundred tourists perched on the rocks of the Giant’s Causeway or walking through the Dark Hedges can really steal away. In the end, every person who has set foot on these shores — whether they were the Scottish warlords who built Dunluce Castle or the first Vikings who raided the coast from Rathlin Island — have come, lived, fought and killed, and eventually died, while this jagged coastline has remained. “One generation passeth away, and another generation cometh: but the earth abideth for ever.”

I have said it before, but its worth repeating: I am in love with this land, the power in its coastlines and the grace and calm of its fields. There’s something meditative and wholesome about waking up the coast of the North Shore, seeing Rathlin Island in the distance and, further still, the mountains on the edge of Scotland. In the evenings, just walking by the stone walls that line the fields and watching the grass light with gold as the sun dips beneath the hills is enough to lighten the heart, and even on dark days when there is nothing but rain it seems — as a member of Corrymeela said to be the other day — that the whole island is crying. There is something poetic to that.

But even this time in Northern Ireland is only for a moment, and there is still a lot of work left to be done in this world when all of this is over, a world that seems even more fractured now that in was a year ago. But I’m realizing, too, that the work and dedication that has to be put into healing the wounds and mending the divides of our world can not just be in government policy or big, international treaties that end wars. It is in the little things, as well — the telling of stories that mean something, the love and warmth we give to one another in the darkest of days, the sharing of faith between religions and denominations and the coming together of communities despite differences. Those, at the end of the day, are what matter.

Or, in the words of Gandalf: “Some believe it is only great power that can hold evil in check, but that is not what I have found. It is the small everyday deeds of ordinary folk that keep the darkness at bay. Small acts of kindness and love.”

It is those small things I have found myself coming back to, as things have become so shaken in the world and in myself. Even as I move through this time in Northern Ireland, and through this final year at university and to whatever lies past that, I’m keeping in mind that it is those little things, the small everyday deeds of love, kindness, and sacrifice, that sometimes matter more than the big issues of politics or international relations.

It is in those little things that I have also just maybe found something worth writing about, when my efforts to write about the big, important events and conflicts that dominate the headlines have so often fallen flat. Writing about things like rivers and fields, about seasons, the mountains and the North Sea, and about the people caught in this mad, crazy world that is full both of pain and suffering and joy and love in equal measure. The little things that we so often forget to look at, so focused on the larger picture — the little things that I myself have forgotten to see these past few years.

That’s not to say I’m straying from my studied in International Affairs. I still want to learn Arabic and French, and to travel to the Middle East and other parts of the world that have experienced fracturing, conflict and hardship. But there is so much beauty in the small things, and at the end of the day, sometimes it’s those small things that shine the only light that matters when things seem their darkest.

So, that’s where I’m at. Writing in notebooks about birds and seasons and moving forward and this island of Ireland. Finding out how to use my words and my travels to create something good and meaningful as the world changes and grows dark. And, above all, figuring how to be a better person, and to move forward each day while leaving hard feelings and pain behind.

The last of those is the hardest, but also the most important. I’m not there…yet, and there are still many, many more days — some dark — ahead, until I find out how to find peace within myself and with others. But that’s okay– it is, after all, what these six months in Northern Ireland are maybe meant to be.